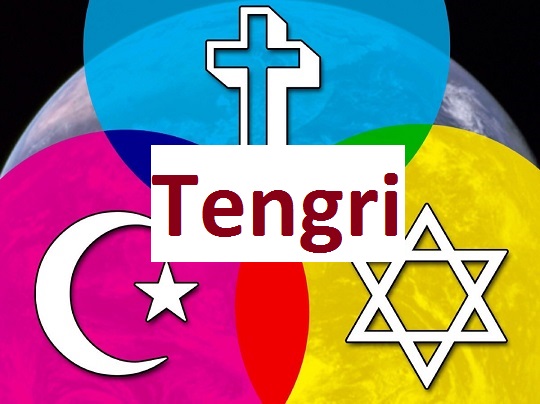 All Major Middle Eastern Religions Were Replaced by Tengri

Turkic groups fought Zoroastrianism before the time of Moses and they used few elements of Zoroastrianism and blended it with their cult called “Tengrism” to create a Turkic version for the teachings of Zoroaster. Then later on they used the same technique with the teachings of Moses, Yeshua, and Mohamed. By this policy they invented the new “universal” imperial religions: Turkic Persian Zoroastrianism; Turkic Jewish Judaism; Turkic Roman Christianity; and Turkic Sunni, Sufi, and Shia Islam.

That was totally unacceptable to many believers but the Turkic elements encouraged such offensive military expansions. Their aims were to hijack Islam and to gain Turkic political, military, and economic powers.

The fourth Caliph Ali (656-661) (Assassinated) was the cousin of the prophet and he stopped that and carried out internal reforms and these were the main causes for the eruption of a brutal civil war throughout his rule (656-661) that ended up by assassinating him and killing most of this family.

By these killings the original Islam died upon birth and it was replaced by a fake Turkic militant cult calling itself Islam. This became the source of terrorism, colonialism, and heresy.

But if they are playing stupid let us remind them: All Turkic groups are equally responsible for wide range of crimes and these groups. Terrorism is in every deep state in the world who are affiliated to any of the six Turkic groups.

The six Turkic groups are:
1- Turkic Muslim in Anatolia and Balkan, (fake Caucasians since Byzantine–Seljuq wars in 1048 Ad),
2- Turkic Shia Persians (fake Iranians since the Achaemenids in 550 BC),
3- Turkic Khazar Zionist Jews (fake Israelite since the tricky Babylonian “Return” in 520 BC),
4- Turkic rulers of Arabia (fake Arabs, following the death of Islam in 655 AD),
5- Turkic “Hindu” Indians and Gypsy (fake Aryans since the Persian conquest in 530 BC), and
6- Turkic Europeans (fake liberal Christians since the “Holy” “Roman” “Empire” in 962 AD)

These groups discovered Zoroastrianism before Moses’ time. They killed it, and used their Tengri cult mixed with few concepts from Zoroasterianism to invent Persian Zoroastrianism. They repeated that with the teachings of Moses, Yeshua,and Mohamed.

Trust me the teachings of Moses, Yeshua, and Mohamed, and Zoroaster all died soon after birth. Most monarchies, bankers, and politicians in Europe and USA are of Turkic making since the so-called English, French, American, and Russian “Revolutions”. These Turkic groups committed all sorts of crimes in Asia, Europe, Levant, Arabia, and Africa.

With just a little of common sense and investigation people can easily find the real historic Turkic connections between them beneath their deceptive mutual hostilities and malignant policies.

With just a little of common sense and investigation people can easily find the real historic Turkic connections between them beneath their deceptive mutual hostilities and malignant policies.

A Turk sent me a number of Facebook messages saying that Europeans & the World were Turkic Slaves, and the Turkic are a masters’ race. These messages are posted at:

A Turk Bragging That Europeans & World were Turkic Slaves

In another group of messages it said that Zionist Jews are also Turkic and the Turkic people subjugated Europe, Russia, India, Africa, and Middle East and whole of Asia. Read and know how these Turkic groups are thinking.

(I received first batch of FaceBook messages from some Cengizhan Atilla at 4:24 AM on 17 March 2017).

The second batch is posted at:

Read them and decide for yourself. They are very interesting, informative, and amazing!

[Yess we’re intend to dominate whole world from 1 khanate,we are everywhere yet still people think we’re all muslims but they never know we have Turks from all religions and we’re inside all their major instutitions, they think we’re asiatic looking people but we enriched our gene pool and religious rituals in the last thousands of years with our major empires in the past we have oldest secrets of all major empires even sumerians are our ancestors,we have giant shadow cults called teşkilat and ihtiyar heyeti.We build and destroy empires and then build them again under different names for last thousands of years.You should know we’re watching you but dont worry everyone thinks youre a conspiracy nutjob anyway.Tengri biz menen ✴🔱]

Serdar Ateş Commented to this article at SouthFront at 00:35,26,March,17

Comments on: "All Major Middle Eastern Religions Were Replaced" (4)