Barbarity in the Coming Age and the Future of Humanity 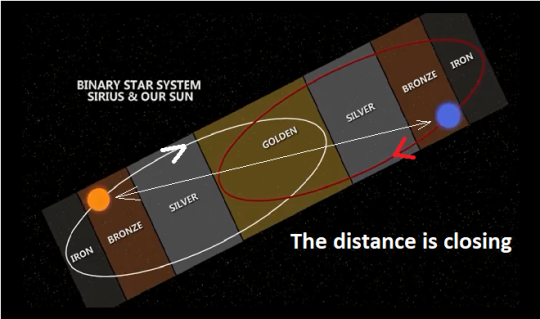 Our Sun is coming closer to Sirius, and this will continue during the coming 6500 years.

The arrival of the Aquarian age has been associated with … well, harmony and understanding, sympathy and trust abounding. The Age of Aquarius is causing great turmoil in order to make room for the new values of love, brotherhood, unity and integrity.

Everything with Piscean values is being exposed and taken down. This includes governments, corporations, individuals, and evil. The Aquarian Age points to the direction of our own evolution in consciousness. We are each being asked to make a choice. We can cling to the old outdated values or adopt the new evolving ones. Our happiness and peace depends on our choice and the change will take place whether we like it or not.

The Age of Aquarius (‘Age of Enlightenment’ or ‘The Golden Age’) is a new era, where peace, love, harmony and freedom become the center of the planet Earth.

The Ascension to the oneness, a major change right now, and never seen before in history.

We can get all the knowledge and wisdom through the Internet, so in our search for truth we realize that everything is connected, everything is one, and that we belong to each other.

The Age of Aquarius began in 2012, which was a prophecy of the Maya.

The change is a process, not an event. It is a transformation in our consciousness to a higher consciousness. It may seem fantastic, but the signs in the heavens point to an extraordinary renewal in the years just ahead. If we recall some recent trends, this prospect doesn’t seem so outlandish. It wasn’t too long ago that we heard about the dawning of the Age of Aquarius, and about the revival of spirit among the new generation. We can still hear the echoes of John Kennedy’s call to action and see the vision of Martin Luther King’s dream. Before he and his dream were shot down in 1968, he said we as a people “would get to the promised land.” The promise seems empty now, yet the planetary cycles support his prophecy. For what we discover when we examine these cycles is compelling evidence that a renaissance and a golden age is right around the corner.”

“You are probably familiar with the term New Age, and you may have heard or read about the dawning of the Age of Aquarius. This simply means that we are leaving one age (Pisces), and entering into a new one (Aquarius). This happens every two thousand years – the last one coinciding with the arrival of Christ.

While we shall be happier and optimistic for the coming Age of Aquarius we find strange type of creatures among us pulling themselves in the opposite direction. They hail barbarity and violence.

I receive repeated hate messages from Turks and they are self-describing about their past and the present. But surely the future will erase such mentality and behavior. They are fighting a losing battle and they don’t know this!

These are the last messages received from a Turk (with all its mistakes):

Our barbarity make us strong u fucken slave. we unified world under one flag and created largest empire of history and created all superpowers hyperpowers of past centuries and even now everywhere under turkic rule our master altaic turco mongol bloodline always ruled the world just like today. We opened amd finished ages. Conquered ruled and plundered the world. Destroyers!! U fucken inferior slave . We ruled and dominated the world and who are u fucken inferior semi subhuman slave? Barbarians are real men. You cowards Fate always conquered by superior master turkish barbarian altaic race. If u want power u should be brutal and destroyed conqueror warrior . Its in human nature as we are all animals. Heil bravery heil great conquests!

Thats shit because it says all humans animals trees bacteries are descendant of common descent. We are being most superior, second is semi subhumans and third is subhumans and rest is other animals and trees. U inferior subhuman suck my superior master dick. We are the master race and most superior creation of universe. U fucken subhuman inferior scum

You fucken unloyal traitor pig. Thats your thanks to turk? We conquered you inferior african and semitic race and protected u guys from other inferior subhuman and semi subhuman races . Is that hate and traitor sharings are your thanks? We master race sheded our blood for protect u inferior slaves. We master race brought peace to your countries. Thats your thanks? U betrayed turks. You die from hunger u fucken poor hungry famine slave ı wont send any help to africa again. I earn 35.000 turkish lira per month(more than 15.000 dollar or 13.000euro ) per month. And per year i earn almost 450.000 lira u can suck my rich ass u fucken poor slave inferior semi subhuman traitor. U inferior subhuman will extinct soon from hunger fucken subhuman

You fucken slave. great history? Lol u have inferior slave history. Which country you comquered? conquests make u superior not building cities like cowards. We destroyed all cities.civilizations couldnt save ur inferior asses from our tentliving barbarian conqueror balls.

Like waves in the sea, the Turks fell on the town and destroyed it completely. Seeing the terrible threat posed by this vile, ugly horde of attackers, with their slanting and lidless eyes, and their flowing hair like that of women, the inhabitants were seized by terror. Especially terrifying were the archers, who were skillful and powerful, and rained arrows down like hail then, like savage wolves, shamelessly threw themselves on the people and mercilessly cut them down in the streets and squares of the town. They did not even take pity on the children who hugged their slaughtered mothers, but sucked the children’s blood like milk.[9]

There are no crueler and more audacious villains under the heavens than the Turks who spare no age or sex and mercilessly cut down young and old alike and pluck unripe fruit from the wombs of mothers”.[13]

Ethiopia, Yemen, and Sudan Must Discover Their Great History and Faith

The Irish Slavery Meme Exposed: The Truth About White Slaves And Slavery