Could Bethlehem or Gerizim be the Real Jerusalem?

For more details on the Ge’ez Puntite Hypothesis read the following three articles:
1- How Persians Cooked a Cult and Called it Judaism Part 1
2- The Turkic Mongolian-African Israelite Joint-ventures
3- Jesus Pointing to “The Lost Sheep of the house of Israel” and “the Gentiles”
[End of notice] Therefore, real Jerusalem is in the land of Punt.

The Second Temple was most probably built in a site totally different from the site of Solomon’s Temple (Beit HaMikdash, means the holy house or temple) for political reasons. Surely, both sites were not in Aelia (present-day Jerusalem). Aelia or present-day Jerusalem is a holy city mainly for Christians, and to a lesser extent for Muslims; but it is not holy at all for Israelite and certainly not for the Turkic Jews.

The Hebrew Bible, which says that the city of Bethlehem was built up as a fortified city by Rehoboam, identifies it as the city David was from and where he was crowned as the king of Israel. The New Testament identifies Bethlehem as the birthplace of Jesus. This brings back the essential question: Why Bethlehem and present-day Jerusalem are both called “the city of David”? There are archaeological discoveries around Bethlehem that intrigue scholars and relate them to the First Temple despite attempts to hush it up.

An article written by Matti Friedman on 19 May 2013 and posted on the Times of Israel is titled: Despite secrecy, interest builds around mysterious First Temple find outside Bethlehem. It says: [Archaeology in the Holy Land has long been caught up in modern-day politics. The Zionist movement always viewed unearthing remnants of the ancient past as a way of proving the depth of Jewish roots in the land. Palestinians, for their part, have increasingly taken to denying the existence of any ancient Jewish history and tend to condemn all archaeology conducted by Israel as an attempt to cement political control.]

The Samaritans (Samaritan Hebrew: Shamerim ), meaning “Guardians/Keepers/Watchers” (of the Torah), Hebrew: Shomronim, Arabic: al-Sāmiriyyūn) are an ethnoreligious group originating from the Hebrew Israelites of ancient time. They have their own Torah, language, history, and Jerusalem. They insist that the Jews are not Israelite or believers; and they are foreigners who displaced the Israelite after the Babylonian Return on 530 BC organized by the Persians.

According to many scholars, archaeological excavations at Mount Gerizim indicate that a temple existed in the first half of the 5th century BC. The history of schism between Samaritans and Jews is known, and by the early 4th century BC the communities have had distinctive practices and communal separation. According to Samaritans, it was on Mount Gerizim that Abraham was commanded by God to offer Isaac, his son, as a sacrifice (Genesis 22:2). 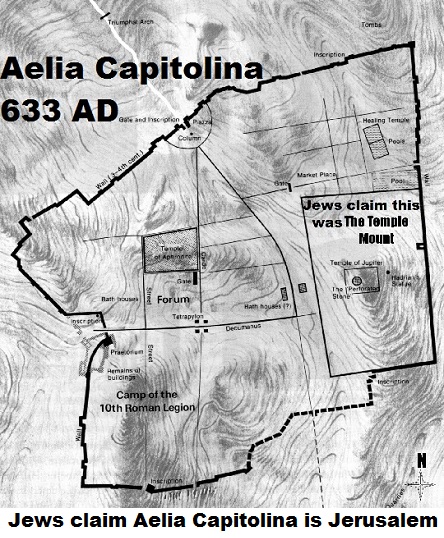 It is Aelia Capitolina NOT Beit HaMikdash, Al-Quds, or Jerusalem

Perhaps the Palestinians are not One Nation but Two Nations