Sexual Abilities Are the Most Important Qualifications Today

Everybody could wonder how so many close people with weak qualification, low intelligence, and poor professional expertise became too rich and too powerful. There is no clear explanation or justification to how these stupid lazy people get such senior jobs, big money, and high social status.

The only possible reason for such “success” is that these unproductive idiots were clever from early age in using their genitals or serve others to lubricate their way to the top.

A young man or woman with determination could use their front or rear private parts or those of their attractive spouses, or just pimp outer sources, to serve another rich and powerful person to gain best pay, best positions, and best conditions.

Sexual contractors exist at all sectors, from medicine to politics, and from armed forces to judiciary. They are around in every community from immediate locality and family to the international organizations and the global elite.

The majority of sexual corruption and perversion are done for free, just for pleasure, or to make minor gains such as residency permit, passport, or a trivial job. But if a person plays it big at young age and with strong cards for some time it must secure big money, power, and status.

Sexual abilities and qualifications are regarded as the real Curriculum Vitae. 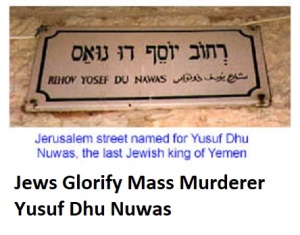 Nehama C. Nahmoud is the author of several works on Oriental, Middle Eastern and Sephardic Jews. She lives in Jerusalem. She wrote an article on the Jewish World Review on January 1, 1998 / 3 Tevet, 5758, titled “When We Were Kings”.

The second part of article is short but very meaningful and for the record here is what it says:
[The most exciting and glorious period in the story of the Yemenites is set between the destruction of the Second Holy Temple and the coming-of-age of the founder of Islam, Muhammad (about 620 CE).

The Arabs in pre-Islamic days were out-and-out idol worshippers; but those who lived in the cities, of course, were in constant contact with the large Jewish populations there, and even the Bedouin tribes who lived in the desert were familiar with the “People of the Book.”

END_OF_DOCUMENT_TOKEN_TO_BE_REPLACED 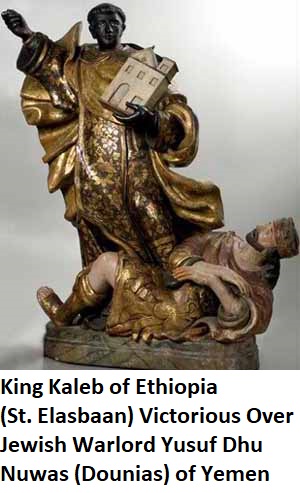 Great Ethiopians (Habashah, Abyssinians): 1- Kaleb of Axum
King Kaleb (ruled circa 514-543) is perhaps the best-documented and best-known, King of Axum (situated in modern-day Eritrea and North Ethiopia).
Procopius of Caesarea calls him “Hellestheaeus”, a variant of his throne name Ella Atsbeha or Ella Asbeha (Histories, 1.20). Variants of his name are Hellesthaeus, Ellestheaeus, Eleshaah, Ella Atsbeha, Ellesboas, and Elesboam, all from the Greek Ελεσβόάς, for “The one who brought about the morning” or “The one who collected tribute.”

Procopius, John of Ephesus, and other contemporary historians recount Kaleb’s invasion of Yemen around 520, against the Jewish Himyarite king Yusuf Asar Yathar (also known as Dhu Nuwas), who massacred Christians in Yemen. After much fighting, Kaleb and his soldiers totally eliminated Yusuf and his forces and appoint Sumuafa’ Ashawa'(Smeaf’ Ashwa’ ( سميفع أشوع)), a native Christian leader of Dhi Yazan (named Esimphaios by Procopius), as his viceroy of Himyar.

As a result of his protection of the Christians, he is known as St. Elesbaan after the sixteenth-century Cardinal Cesare Baronio added him to his edition of the Roman Martyrology despite his being a miaphysite. However, the question of whether Miaphysitism—the actual christology of the Oriental Orthodox Churches (including the Coptic Orthodox Church)—was a heresy is a question which remains to this day, and other Oriental saints such as Isaac of Nineveh continue to be venerated by the Chalcedonian churches.

Axumite control of South Arabia continued until c.525 when Sumuafa’ Ashawa’ was deposed by Abraha (Abraha al-Ashram, أبرهة الأشرم, أبرهة الحبشي), who made himself king. While Abraha he was not Ethiopian Turko-Arabs still deliberately call him “(Abraha al- Habashi) the Ethiopian” just to accuse the Ethiopians of his criminal attempt to destroy The Holy Kaaba of Islam in Mecca. He ruled Yemen from 531 AD to 565 AD.

END_OF_DOCUMENT_TOKEN_TO_BE_REPLACED

The history of what became the modern State of Israel could be viewed in two two-thousand years parts. The first period before the Ministry of Jesus Christ (Yeshua) and the second is from that year until today.

I started writing this article and it is getting lengthy. Therefore, I post this is as the first part.

END_OF_DOCUMENT_TOKEN_TO_BE_REPLACED

The Myths of Judaism and Antisemitism

The Original Promised Land Rejected by the Israelite

It is very important to draw clear distinctions between three different groups. First: the ancient Hebrews “sons of Israel” those who remained faithful to the Scriptures, few of them are left in southern Arabia, Yemen, and Ethiopia. Second: the unfaithful ancient Hebrews “sons of Israel” who invaded, colonized, and mixed with the Canaanite. And the third group is the Turkic “Jews” and followers of “Judaism” who were invented by Persia after a fraudulent return from the Babylonian Captivity, present day Jews, who invaded the invaders and colonized the colonizers of unfaithful Israelite in Canaan.

The Israelite rejected both the Scriptures and the Promised Land and faked the Exile, and the Exodus and forged the Scriptures to legitimize their illegitimate colonization of Canaan. Then came the Turkic Persians and dislodged the unfaithful Israelite by inventing the Jews and Judaism.

Both Exiles were fake. The first Exile of Egypt (1876-1446 BC) was fake because it was in Ethiopia not Egypt. The second Exile/Captivity of Babylonia (585-535 BC) was also fake because it was only imprisonment of few hundreds from the House of David and their officials but it didn’t include the Israelite people. The Return from the second Exile/Captivity was made of hundreds of thousands of Turkic Persian colonizers claiming to be decedents of the few Davidic captives who never returned. The Turkic Persian colonizers are the first Jews and they took over the Semitic Hebrew Israelite.

The Hebrew language must have went through four radical periods during its development due to Hebrew movements and settlements. These periods are: the Yemeni Era, the Ethiopian refuge era, the post-flee to Ethiopia era, and the post Neo-Babylonian captivity era. This definitely also indicates cultural and genetic changes of what is known today as Jews and remaining Israelite. The world will take ages to admit that the old stories of Old Testament and the foundations of many religions, politics, and institutions are totally fictitious.

Today the six Turkic main groups (without mentioning those in Russia, Africa, and Central Asia) are:

2- Turkic Shia Persians (fake Iranians since the Achaemenids in 550 BC),

3- Turkic Talmudic Zionist Jews (fake Israelite since the tricky Babylonian “Return” in 520 BC),

4- Turkic rulers of Arabia (fake Arabs, following the death of Islam in 655 AD),

5- Turkic “Hindu” Indians and Gypsy (fake Aryans since the Persian conquest in 530 BC), and

Plus these groups are the Turkified Scythians who invaded, enslaved, and created the Slavs and Thracians in Caucasus and Balkans since 600 BC.

“Islamic” organizations and all the Palestinian issue are Turkic Mongolian drama. Jews and Judaism were created once by the Turkic Persians, then later Zionism was created by the Turkic Ottomans. Ukraine is a Turkic old enslaved region taken from Ruthenia.

Three Turkic groups are working together to form three empires. Turkish from Balkan to China, and Gulf Empire from Oman to Mauritania, and Greater Israel inside Russia.

Slavic-Turkic origins of the Ashkenazim Jews 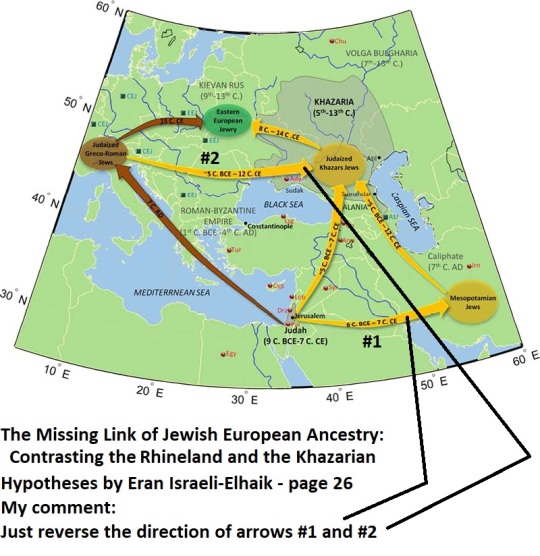 The major migrations that formed Eastern European Jewry according to the Khazarian and Rhineland Hypotheses are shown in yellow and browns, respectively

Here are two researches which examine the Slavic-Turkic origins of the Ashkenazim Jews:

The Ashkenazic Jews: A Slavo-Turkic People in Search of a Jewish Identity, by Paul Wexler